We can now take a closer look at the church of Santa Maria, which nestles between the picturesque squares, the Plaça del Pi and Plaça Sant Josep Oriol

Antònia, the biggest of the six bells that crown the octagonal belfry of the church of Santa Maria del Pi can be heard ringing out all around Barcelona's Gothic Quarter.

A church stood on this site as long ago as the 5th century but the current basilica of Santa Maria del Pi was built between 1319 and 1391, in the Catalan Gothic style. It comprises a single nave, with side chapels between buttresses. The cross-vaulted ceiling, which is one of the highest in the country, gives a true sense of monumental scale. Four of the stained-glass windows are original and were created by one of the finest stained-glass artists of the Catalan baroque period, Josep Ravella. One of the foremost painters of the day, Antoni Viladomat, also worked on the windows. The large rose window is an exact copy of the 14th-century original and was made by Josep Maria Jujol after the Spanish Civil War. It is one of the largest in Catalonia. Inside the church is a 14th-century Gothic image of the figure of the Virgin of the Pines. The church also has a museum which houses an important collection of gold and silverware and some outstanding medieval funeral escutcheons which are unique to Catalonia.

It is said that a pine forest once stood on this site of Barcelona's Gothic Quarter, and, indeed, a pine tree still stands in front of the church. At the side of the church, the Ave Maria doorway features some Romanesque elements of the previous church. The church of Santa Maria del Pi houses the remains of many members of Barcelona's nobility and the remains of the most Barcelonian of saints, Sant Josep Oriol, who was a priest at this famous church. 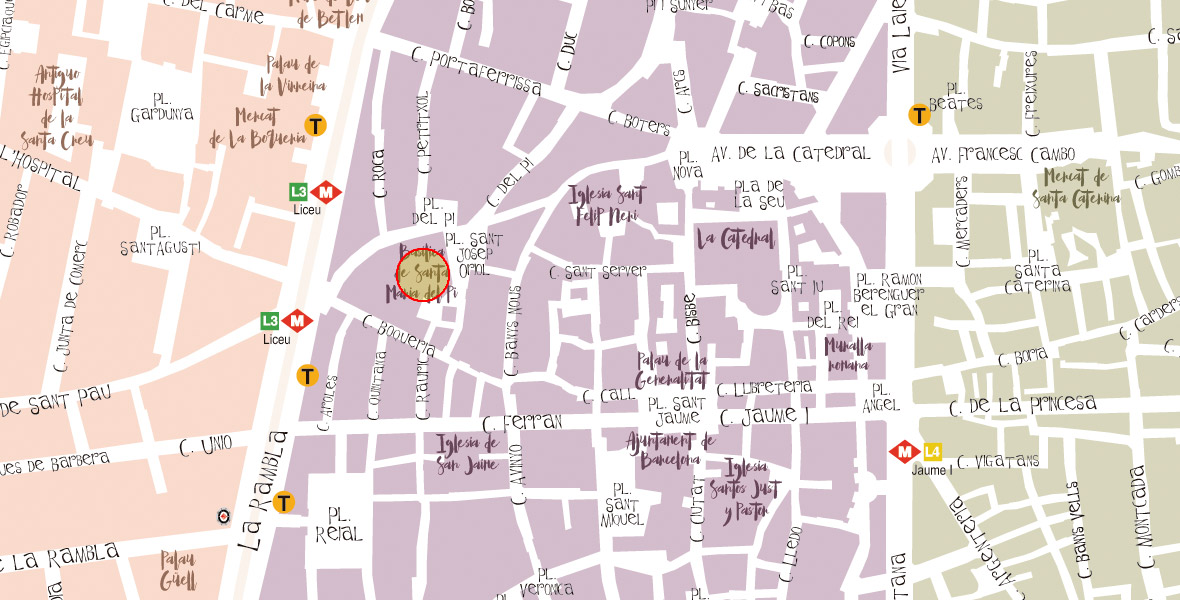