The corners of Ciutat Vella that cinema has immortalized

The cinematic journey through Ciutat Vella can be started in the Plaza de la Merce, dominated by the church of the same name and decorated with a beautiful fountain in the nineteenth century that was formerly located at the fishing pier.

The square is also the scene of some sequences of cinema, as the two scenes-the first and the last, of the perfume, Tom Tykwer's film of Patrick Suskind's novel.

The birth of the protagonist of this story of aromas and murders, Jean-Baptiste Grenouille, comes amid a bustling marketplace surrounded by debris that was enabled on this square.

The unhealthy atmosphere of a Paris square eighteenth century was recreated in this pleasant corner, which tons of meat and fish were carried to emulate the feel of a popular market. Grenouille's death, surrounded by a delirious crowd, was also shot in the Plaza de la Merce, unrecognizable in the film.

The square serve to acclimate the Madrid civil war in some sequences of The Anarchist's Wife, filmed in 2007 and starring Maria Valverde and Juan Diego Botto.

From this corner the small street Escudellers is reached, at number 12 is a popular bar also become an alternative movie theater. The sessions, one day a week is devoted to short films and have a hearing alternating drinks and cinephile. 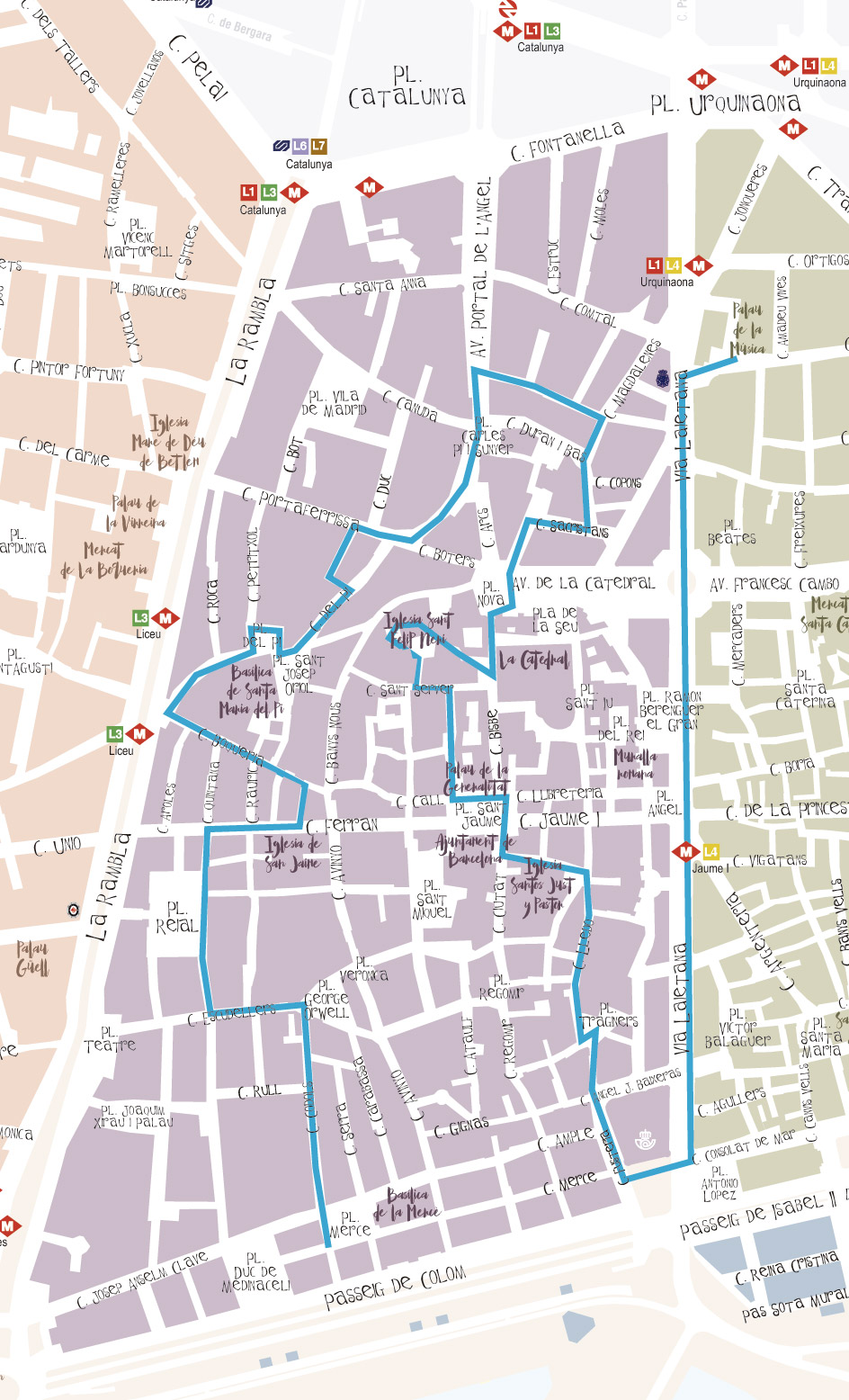 You skirt the Plaça Reial to peer into the narrow street Quintana, which opens its doors Can Culleretes, restaurant founded in 1786 and listed as the oldest in Barcelona. Its walls witnessed the passage of a clientele that includes many artists and people from the film world.

The nearby street Ferran also appears in the perfume with the arrival of Grenouille in Paris, moving between horse carts, spice stalls and colorful people.

Another side streets that overlook the street Ferran is the street of Glass, at number 1 is the herbalist's Rei, one of the oldest establishments in Barcelona, ​​dates from 1823 and is chaired by a marble fountain that formerly used for storing leeches.

The cabinets, with drawers painted watercolors, saved countless seasonings and herbs, and also served to illustrate moments of perfume and other period films, and unconscious, starring Luis Tosar, Mercedes Sampietro, Leonor Watling and Juanjo Puigcorbé . This film, directed by Joaquín Oristrell, is a comedy set in Barcelona in the early twentieth century, around a couple of enlightened bourgeoisie, strongly influenced by the emerging theories of Freud.

The tour concludes at Ferran Street Plaça de Sant Jaume, whose historical past dates back to Roman times and which stand face to face, the building of City Hall and the Palau de la Generalitat. Both have a presence in the film Manual of Love 2, filmed in the summer of 2006 by director Giovanni Veronesi. Outside the Town Hall or Casa de la Ciutat looms significantly in this comedy hit, when the gay couple who stars in one of its episodes decides to marry in Barcelona, ​​and you can not do in Rome, his hometown.

Film cameras rolled from the balconies of the Palau de la Generalitat in the shooting of Tirant lo Blanc. The film of Vicente Aranda Barcelona, ​​shot in 2004 and based on the famous novel of chivalry Eisner had a stellar cast including Victoria Abril, Giancarlo Giannini and Leonor Waitling.

In the vicinity of the Plaza de Sant Jaume, another emblematic corners of Ciutat Vella is the Plaza del Pi, an endearing far corner of the confluence of urban bustle and some addresses of interest to movie lovers.

One is a specialized trade posters ranked No. 10 in the nearby Calle Cardenal Casañas and brings together many examples of posters dedicated to cinema.

Another stop that should be taken into account in this walk is the Maldà cinema, converted into an interesting alternative cinema room and one of the few Bollywood films exhibited nationwide.

The route continues towards the street Portaferrisa and allowed near the Cathedral Square, across the street Bisbe, one of the most emblematic of the Gothic Quarter and where different stories intertwine also celluloid.

Again are the protagonists of Manual of Love 2 which toured the race for this street in the sequence that led them to their wedding at City Hall. On the same street, a Japanese couple through the city in Dream come true, a cinematic rarity also filmed in 2007.

One of the essential references in this tour is the Cathedral Square, presided over by this monumental temple, which began in the eleventh century and preceded by a splendid staircase.

The cathedral is a frequent film set. Hovering in Barcelona, ​​a map, shot by Ventura Pons in 2007 and starring three of the great figures of the interpretation of Catalunya: Nuria Espert, Josep Maria Pou and Rosa Maria Sarda.

In the same year, the cathedral also illustrated some foreign planes, a film directed by Argentine Fernando Diaz and participated in the Cannes Film Festival in 2008. The plot begins with life in Barcelona Mary, a woman Argentina has to travel to a remote corner of the country.

The cathedral also appears in the perfume, while Grenouille follows in the footsteps of a young seller of plums, fascinated by its aroma. The scene ends with the murder of the girl in another close scenario, the Plaça de Sant Felip Neri.

The square appears in Gaudi Afternoon, in which cast included Judy Davis, Juliette Lewis and Lili Taylor. The film was directed in 2001 by the American Susan Seidelman before dealing to produce the successful Sex and the City.

The journey continues to the north of the district up to the Montsió street, where is Els Quatre Gats, a real institution of restoration in Barcelona. The hotel opened in 1897 and is part of a building designed by Puig i Cadafalch, one of the modernist architects who revolutionized the face of the city at that time building. Since then, Els Quatre Gats has been a place of cultural and artistic reference and a meeting place for many artists such as Picasso during his stay in Barcelona. Just within several blocks of the young Picasso, a television series in 1993 directed by Juan Antonio Bardem were shot.

The chances of the film have meant that, many years later, another member of the saga Bardem, Javier actor, return to this location for filming the sequence in which addresses for the first time Scarlett Johansson and Rebecca Hall, Vicky Cristina Barcelona, ​​Woody Allen.

The nearby Via Laietana also played a role in the film of the New York director who filmed here the sequence of a popular firework. The importance of this street is evident in his frequent presence on screen in films of very diverse subjects.

The route of this urban artery can be started at the central post office, which occupies a 1914 building located at number 1 on the street. The property was present in some scenes from the lives of Celia, Antonio Chavarrías, and also appears briefly in The Sea Inside, directed by Alejandro Amenabar and based on the life of Ramon Sampedro. In this moving film Central Post pretended to be the court where the judgment Sampedro denied the right to end his life was dictated.

In 2001, filming a horror movie Darkness filled the Via Laietana cameras and caused more of a surprise to unsuspecting pedestrians. The film's director, Jaume Balagueró, simulated a car accident here in a scene with artificial rain in which more than two hundred extras.

Another film that rise buildings along the Via Laietana is the Palau de la Música, a beautiful 1905 building designed by Lluis Domenech i Montaner and ranked as one of the jewels of the Barcelona Modernism.

The palace also appears in All About My Mother, Oscar winner Pedro Almodovar film shot in 1998 on location in Barcelona. In this case, the building's facade looks out on various scenes from the house's character Agrado, played by Antonia San Juan, who lives opposite the building.

The end of this film concludes walk on the street that leads to the Palau de la Música, Sant Pere Mes Alt. For she walked arm in arm two of the actresses of the latter film, Antonia San Juan and Cecilia own Roth, bordering pretty Gremi dels Velers building, with its facade of graffiti.

Classification of the route: Cinema
Time of year: All year round
Means of transport: On foot
Distance: 5 km