Olaguer of Montserrat, chancellor of Catalonia, later Bishop of Urgell, set in place the Congregation of Secular Priests of San Felipe Neri in late May 1673.

The romantic, slightly faded Plaça Sant Felip Neri is an unmissable corner of the Gothic Quarter

Presided over by the baroque church from which it takes its name, the square features a number of historic elements that make it particularly attractive, especially when you view it in silence.

The narrow, labyrinthine streets of the Gothic Quarter come out into this unexpected spot. A tiny square with a charming little fountain in the middle and overlooked by the baroque church of Sant Felip Neri. On one side, you can see the buildings that once housed the city's shoemakers' and coppersmiths' guilds, which moved here from their premises on Carrer de la Bòria and Carrer de la Corribia, respectively. The shoemakers' guild building is now home to the city's footwear museum and bears a relief in the shape of a lion. It represents Saint Mark, the patron saint of shoemakers.

Next to the church, the school of Sant Felip Neri still survives. When the schoolchildren aren't playing in the square and you listen to the silence, you can almost hear the sound of the bombs that fell from the sky one fateful January in 1938. You can still see the wounds etched into the façade of the church and they still seem to hurt. A plaque reminds us of the fact that a bombing raid by fascist planes ended the lives of 42 people, many of them children who had sought refuge in the air-raid shelter below the church. Now, the children play in the shade of the acacias, unaware of this tragic past, in this square that marks the entrance to Barcelona's Jewish Quarter. 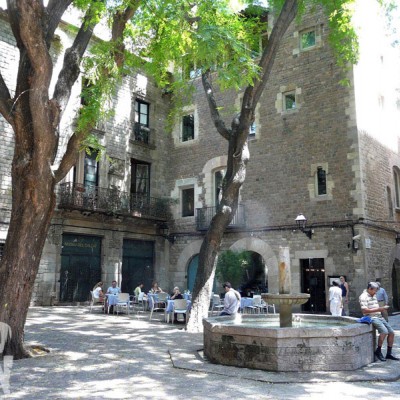