The name comes from the fact that she is facing the royal palace of the Counts of Barcelona and its chapel, called St. Agatha. Data at least the thirteenth century. Over the centuries it has witnessed many historical events.

The Conjunt Monumental de la Plaça del Rei in Barcelona is, arguably, the Gothic architectural ensemble which best exemplifies the city's medieval past

The royal palace, the Palau Reial Major, and its surrounding buildings, enclose a harmonious and peaceful square which is still imbued with Barcelona's splendour during the Middle Ages.

The imposing royal palace, the Palau Reial Major, rises up at the back of the Plaça del Rei in Barcelona, with the Watchtower of King Martí on one side. The palace was the residence of the Catalan counts from the 13th to the early 15th centuries, and the history of the building can be traced back to the Barcelona of the 11th century, although its current appearance is the result of alterations carried out in the 13th century. This means that the building is predominantly Gothic in style, although the base of the building features Visigothic and Romanesque elements. Inside, the Great Hall, or Saló del Tinell, with its round arches, is the most representative and beautiful room in the Palau Reial Major.

On one side of the building, on top of the old Roman wall of Barcelona, you can see the 14th-century royal chapel of Santa Àgata, which contains the valuable Contestable altarpiece by Jaume Huguet. The building opposite is the 16th-century Palau del Lloctinent, or Lieutenant's Palace, which has a beautiful Renaissance courtyard and is currently home to the Archive of the Crown of Aragon. Closing off the Plaça del Rei is the Casa Clariana-Padellàs, the home of the city's history museum, the Museu d'Història de la Ciutat de Barcelona, which contains the archaeological remains of Roman Barcelona. 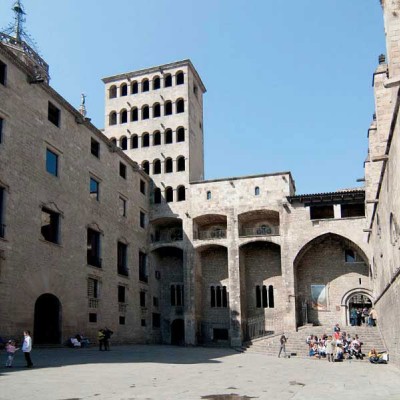