Urban space created from the Central Plan Raval Ciutat Vella. It includes the streets of St. Jeroni and of the Cadena, which are integrated into the new space.

An oxygenating "lung" in the heart of the Raval

This is the newest of Barcelona's Ramblas, a broad avenue which attracts people from diverse social, cultural and geographical backgrounds. It's one of the favourite streets among young locals and visitors who see how the neighbourhood is changing day after day.

Ildefons Cerdà had already planned to open this artery in the southern part of the Raval. At the beginning of the 20th century, the "barri xino" was a densely populated area that offered harsh living conditions. Cerdà considered the need to create squares that would clean up the neighbourhood. But it was not until 1995 that Barcelona City Council decided to remodel the Raval. This is when this new Rambla was created. It runs from Carrer Sant Pau to Carrer Hospital, and has become one of the meeting points for the communities of immigrants who live in this part of Barcelona. The construction of the avenue led to the demolition of a number of streets and insalubrious buildings. The street collaborates in the social integration of disadvantaged groups, and has also become a perfect public space for all kinds of cultural events.

The social profile of the new Rambla changes day after day: the inauguration of a new hotel in 2008, the opening of modern restaurants and the new cinematheque, the Filmoteca, have given an economic shot in the arm to a neighbourhood that is becoming more and more integrated into the city. Meanwhile, at the end of the avenue, the enormous Cat by Fernando Botero looks on impassively with a smile on his face. 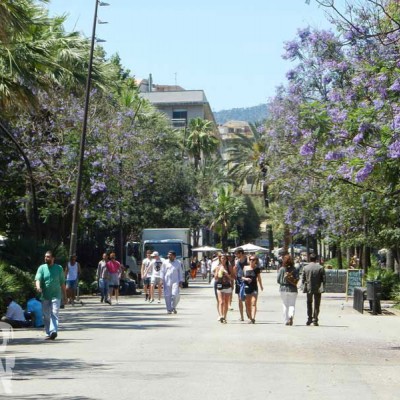