Spit that separates the first walls of Barcelona's Raval is the port and the Plaza de Catalunya. The development starts in mid-eighteenth century, when it was just a road and an occasional stream with the walls of King James on one side and convents on the other.

La Rambla is exactly 1.2 kilometres long and nearly everyone who visits Barcelona walks along it

La Rambla was laid out in 1766, following the contours of the medieval city walls that had bounded this part of Barcelona since the 13th century.

La Rambla was originally a watercourse which channelled water down to the sea, alongside the 13th-century city walls. Between the 16th and 17th centuries a number of large convent buildings, schools and a theatre were constructed along the watercourse. At the end of the 17th century, the gradual demolition of the wall defined the layout of La Rambla as a boulevard and led to the construction of elegant town houses for the city’s gentry. The seizure of church properties during the 19th century brought about the definitive change of La Rambla. The old convents were replaced by a public square, a market, a theatre and other buildings. Flower stalls, a bird market, newsstands, public seating, drinking fountains and street lamps also began to be added at the time and, as the years have gone by, they have become its most characteristic and popular elements.

La Rambla is currently divided into six sections: Les Canaletes (named after the drinking fountain at the top), Els Estudis (after the university that once stood here), Les Flors (after the flower stalls), Els Caputxins (after the Capuchin convent), Santa Mònica (after the convent of the same name) and Mar. These names are reminders of different periods in the history of Barcelona’s most famous boulevard 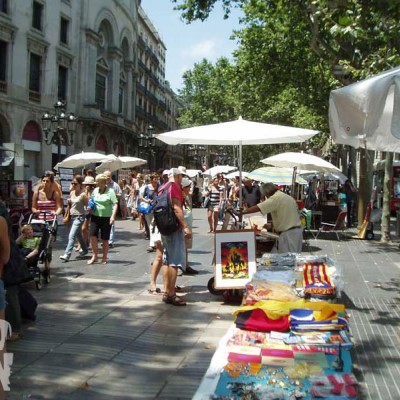