It was formed in 1355 when the City Council decided to channel to the Plaza de Sant Jaume waters from the Collserola. The October 30, 1355 they began to demolish the houses had front door of the Palace of the Bishop. In April 1358 the square was already finished: since then carries the current name.

Wall and gate of the Roman city of Barcino

A small area crammed with elements that recount the history of Barcelona and its art. A visit to the Plaça Nova brings you face to face with the monumental gateway in the wall of the Roman city of Barcelona.

The origins of Barcelona's Plaça Nova can be traced back to 1358, when it was the site of the city's hay market. At the time, the locals could still see one of the four gates in the wall to the Roman city, which led to the Forum, along the Cardus. Two circular towers flank the gate that leads into the heart of the Gothic Quarter. These are the result of renovations carried out during the 12th century, although the origins of the defence towers and wall can be traced back as far as the 1st century BC and the 4th century AD. A replica of a section of the Roman aqueduct emerges from the side of the Archdeacon's House, or Casa de l'Ardiaca, marking one of the points where water was conveyed to the city. Opposite, a visual poem by the Catalan artist Joan Brossa, spells out the word Barcino. 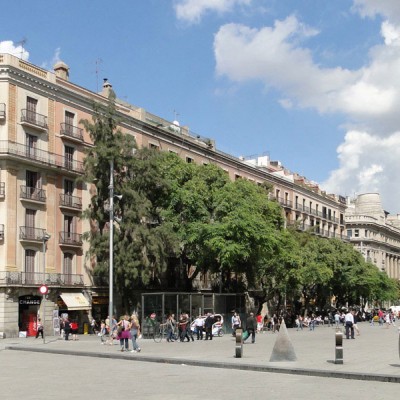