Walkway connecting the plaza del Portal de la Pau dock with Spain. The natural prolongation of the Rambla is considered.

Stroll along the modern Rambla de Mar and see how it opens to allow the recreational boats to pass through.

The Rambla de Mar is a walkway over the water, the natural continuation of the Ramblas in Barcelona.

Designed in 1994 by the architects Albert Viaplana and Helio Piñón, its modern architecture and minimalist form are the most emblematic image of Port Vell.

It is an undulating wooden walkway, with two openings, supported over the water by two iron arms. Every hour on the dot it opens to allow recreational boats to pass through. Watching its sophisticated mechanisms in motion is a real spectacle worth seeing 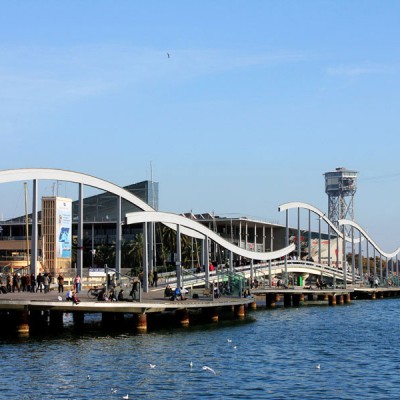