Its present form dates back to 1841. Formerly the small crossroads that formed the intersection of the two roads running through the city from north to south and from east to west: Llibreteria-Escrivanies-Call and Bisbe-Ciutat-Regomir. Already it existed in 1261, when the church of San Jaime, established in 1057. In the fourteenth century a porch under which the city councilors met when they had to attend a public event corporately added was there. In 1598 it was decided to enlarge the Palace of the Generalitat to the small square facing the church porch. In 1823 the City Council agreed to demolish the church and other outbuildings to form a large square, the current, which opened in 1840 with the name of Constitution Square.

Today the Plaça Sant Jaume is an open space, a “lung” in the middle of the Gothic Quarter. The square is the site of the most important buildings in the lives of Barcelona and Catalonia: City Hall and the Palau de la Generalitat.

The current appearance of the Plaça Sant Jaume dates from 1823, a period when it was remodelled and renamed the Plaça de la Constitució. The new shopping street, the Carrer Ferran, was built at the same time and a space that had previously been small and crammed with buildings was opened out. Indeed, before this, the square had been a small area that had grown at random, and the site of the church of Sant Jaume with its cemetery. After the houses were demolished and the church was moved to Carrer Ferran, Barcelona's new political heart was created. Two imposing buildings flank the square: on one side, the Palau de la Generalitat, the seat of the Catalan Government, and on the other, Barcelona City Hall.

Both institutions existed in medieval times and are still responsible for governing the lives of Catalans and the people of Barcelona. The location of both buildings is no chance occurrence. The Plaça Sant Jaume is located at the place where the main streets of Roman Barcino converged, the Cardus (now Carrer de la Llibreteria and Carrer Call), and the Decumanus (now Carrer Ciutat and Carrer del Bisbe). This was the Roman forum, the centre of the Roman city where the Temple of Augustus once stood, the remains of which can still be admired in the neighbouring Carrer Paradís. 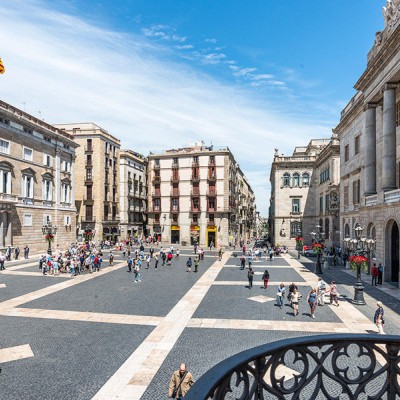